Venom, arguably the most popular anti-hero in comic books, has his film coming later this year. I reviewed the first trailer a few months ago on this blog if you read it: VENOM MOVIE TEASER TRAILER REVIEW you can tell it did not impress me all that much. A couple days ago the full-length trailer had released. What did I think about it? Let me tell you. First, if you haven’t seen the trailer yet here it is:

Now, I have already vented about my concerns on Spider-man not being in the film, so this review will just be on the trailer itself. Let’s say the obvious first, the actual design of Venom looks absolutely insane. He looks as though he was ripped straight from the pages of the comics and his voice is exactly how it should be. The voice of Venom reminds me of a mixture of the Venom from Spider-Man the animated series and the demon’s voice from the video game; The Darkness, which is perfect. Having Tom Hardy play as the character and judging Venom’s design, we can all collectively say that he is probably going to be better than Topher Grace was.

This isn’t to say that the trailer was an overall success though. Judging just from the trailer, the dialogue seems very cheesy. The line that really sticks out to me is the “bad people” line, something just seems off and does not feel natural or realistic. Secondly, Tom Hardy’s accent seems to be all over the place, sometimes sounding American, other times sounding as though he’s from somewhere in Europe. 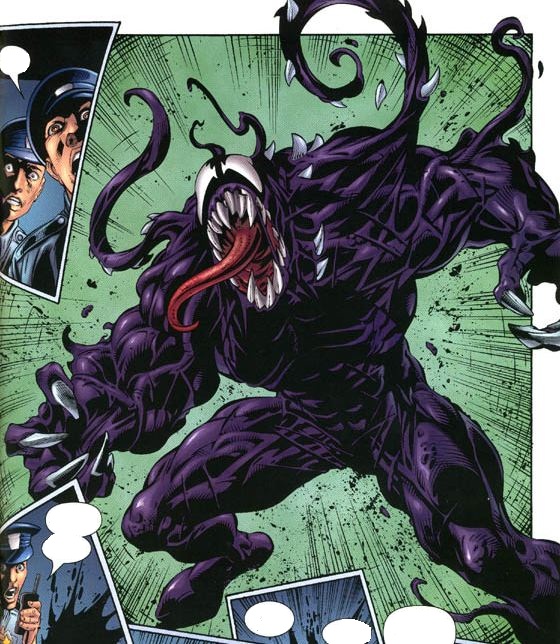 Above is an image from one of my favourite games of all time Spider-Man on the PlayStation 1. This and the animated series are what introduced me to the character of Venom and he quickly got to the top of my favourite comic book characters. Even in the kid-friendly game/show Venom was still an unhinged and scary character, who you could never trust. He had a sick sense of humour and wanted nothing more than to ruin Spider-man’s life.

You may think that with this many complaints, that I’m not excited about the film, but I am; purely due to my fandom of Venom. Let’s just hope that Sony doesn’t mess this character up the second time around. Tom Hardy rarely chooses bad films and the design for Venom is amazing. Let’s keep our fingers crossed and in about half a year we will find out.