Here we are, one of my favourite times of the year… HALLOWEEN! Every year as soon as we enter the month of October, I start watching horror films to get me ready for one of the coolest times of the year. I always try and watch different films every year to keep things from becoming repetitive, but there are some films which need to be seen every year because they are so good; these are my top ten favourite horror films of all time!

The film exemplifies everything that was great about 1980’s cinema; fantastic practical effects, a killer soundtrack and a brilliant antagonist in Freddy Krueger. Watch the first Nightmare on Elm Street and then watch this one, then tell me this one isn’t far more enjoyable and a lot more fun than the first. The first film isn’t bad by any means, it is a classic; but a lot of people don’t give this movie credit, where credit is due.

“And Jesus wept”, a movie line that sticks with me as much as the scene that comes with it. Hellraiser is an outstanding movie that only gets better every time that you watch it. A film that explores the feelings of pain and pleasure and how far someone will go for pleasure. We also get introduced to the Cenobites and their leader Pinhead, sick, disgusting demons of disturbing types of pleasures. Hellraiser is definitely not for the faint of heart, but if you are looking for a classic 80’s horror flick, with plenty of scares, gore and a gripping story; Clive Barker’s brutal and bloody masterpiece Hellraiser is the right film for you. Although like many horror films it’s sequels were far to be desired (the second one is okay) the first film of the franchise is a fantastic movie.

NUMBER 8: SHAUN OF THE DEAD

Shaun of the Dead, directed by one of my favourite directors Edgar Wright, in my opinion, is still his best film to date. Created after his fantastic TV series Spaced, Edgar Wright brought his A game to this film. The movie is a beautiful blend of hilarious comedy and a thrilling zombie horror, it is both satire and a brilliant homage to many of the best zombie films. Easter eggs are everywhere in nearly every scene and every re-watch of this movie is rewarded because of this. Although it could be argued that Shaun of the Dead is more comedy than horror, you cannot argue that the practical bloody effects and the scares are still there in abundance and has many emotional moments in the film. This was the first of the Cornetto Trilogy which consisted of Shaun of the Dead, Hot Fuzz and The World’s End, although all three were great films, this, in my opinion, is still the best. The Babadook is one of the best and most compelling horror movies in the last few years. Without spoiling too much (because it is still quite a recent film) it is about much more than just horror, it is a challenging and important movie which deals with real life horrors such as depression and insanity. The 2010’s has been a decade of supernatural horror films, starting with “Paranormal Activity, to Insidious and The Conjuring, all good films at their own merit. The Babadook stands out though, as something more deep and psychological, than any of these films could possibly want to be. 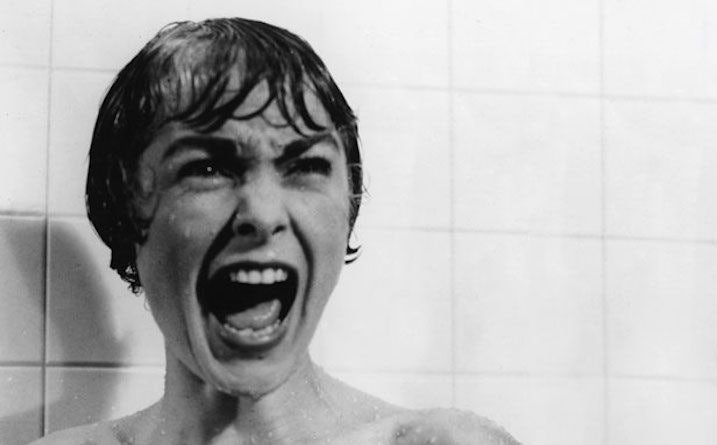 In the wake of the classic Universal Horror films and the Hammer films, there was an over saturation of Gothic monster movies and sci-fi. True there were psychological thrillers, but none came close to when Psycho was released in 1960. What some might say is the first ever psychological slasher film, Psycho is a horror classic filled to the brim of memorable scenes and inspired countless movies for decades, even now. Alfred Hitchcock directed many a masterpiece in his day and Psycho is definitely one of them, if not the best one.

The Thing is a masterpiece. Directed by one of the masters of horror John Carpenter, it took a simple premise and added a shape-shifting, mass murdering alien. A group of scientists are stuck in their base camp in Antarctica and no one knows who are human and who is The Thing. Tackling themes such as claustrophobia and the fear of the unknown, The Thing still strikes fear even though it is a thirty-five-year-old film. The practical effects are still absolutely breathtaking, pitting our protagonists in sick and gory situations, but you can’t help but be astounded with how good it all looks. Just look at this infamous scene:

if that still doesn’t make you want to watch it, then I’ve got two words for you, Kurt Russel. This was Kurt Russel in his prime when he and John Carpenter just made hit after hit and The Thing is the best of them.

In 1979, Ridley Scott had created one of the most influential sci-fi horrors of all time and introduced us to one of the most recognizable movie monsters the Xenomorph aka Alien. The film has aged masterfully, the effects and acting are insane, one of the special effects becoming a classic which is still being parodied and copied today, that scene is this:

The film also introduced us to one of the most bad-ass heroines of all time Ellen Ripley played by Sigourney Weaver. The transformation of her character throughout the movie is fantastic and she helped prove that the heroes of film don’t always have to be male. Alien, like many other horror movies spawned off a franchise, difference is that the sequel was equally amazing and has had tons of great comic books and games created as part of the franchise as well.

Sam Raimi had made an absolutely mad film with The Evil Dead, it was one of the first “cabin in the woods” movies made. The gore was incredible, the camera work was insane and best of all, it was unintentionally (or intentionally) hilarious. He saw the potential of this so went all out with the 1987 horror classic Evil Dead 2. Nearly every scene in this film is extremely memorable there’s the eyeball going into someone’s mouth, Ash getting possessed and of course the possessed hand scene, one of the funniest, yet gory moments in any film.

Evil dead also spawned a franchise, this time every film and TV show is excellent. The Army of Darkness took the humour to new heights, the remake in 2013 took it back to it’s gory routes and the new show Ash vs. Evil Dead is exactly what any fan of the series wanted. Everyone has their favourites in this franchise, but to me Evil Dead 2 did it best.

There are countless adaptations of Stephen King novels, The Shining is the best of these and strangely enough Stephen King hated this movie, because it deviated so much from the book. What the masterful Stanley Kubrick did with this film was incredible, he crafted an intense and eerie setting straight from the get-go. There is horrific imagery everywhere in the film and you really feel how Jack Torrance (played by Jack Nicholson) could have cracked.

The performances by all the actors and actresses is great, although Stanley Kubrick did treat Shelly Duvall horribly the whole time filming this. The Shining is not a conventional horror film, it doesn’t rely on a lot of gore, jump scares or darkness. What it relies on is you really feeling the claustrophobia and insanity of Jack Torrance and to give you a genuine feeling of uneasiness.

Everyone has their favourites and no one will agree on everything, but to me Wes Craven’s Scream is my favourite horror movie of all time. Why? You ask, there isn’t that much gore, it isn’t that scary and the design of the villain is incredibly simplistic. All these things are true, but Scream is an important movie to me and also cinema this is why. When Scream was released in 1996, horror was over saturated with sequel after sequel of slasher movies and most of them were awful. This film critiqued this, it made it a satire and poked fun at all the rules these films have such as; don’t have sex, don’t say “I’ll be back”, the ‘final girl’ trope and the seemingly unstoppable killer.

I grew up with this film and have watched this every Halloween to date, it is a perfect mix of genuine horror, satire comedy and fun. Although none of the sequels lived up to this first film (although the second one was okay) there’s no denying that Scream was huge and the costume is still one of the most recognizable designs up there with Leatherface, Freddy Krueger, Michael Myers and Jason Voorhees. The funny part of that is Ghost Face was a parody of all these villains and is now as big as them.

Overall these 10 movies are the most important horror movies to me personally, of course as a huge horror movie fanatic I love hundreds of horror films, so it was nearly impossible to just choose 10. So let me know what your favourites are and most importantly…..